La Cotte de St Brelade is a Paleolithic cave site on the southern coast of Jersey recognized as being the earliest hominim occupation site in the Channel Islands and possibly the last Neanderthal site in NW Europe. The site was first excavated by Robert Merett in 1910 and work continued intermittently at La Cotte until the late 1970s with C.M.B. McBurney from Cambridge.   In 2010 a team of specialists began investigating the site again as well as revisiting the vast collections of artefacts from previous excavations. The project draws on specialists from University College London, University of Southampton, The British Museum, University of Manchester, University of York, University of St. Andrews and University of Wales, Trinity Saint David. 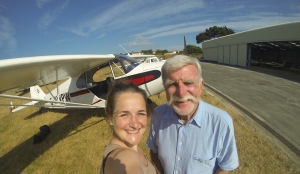 As part of Ice Age Island‘s 2013 field season, Drs Beccy Scott and Matt Pope arranged for Sarah to go up with pilot extraordinaire, Chris Winch in order to photograph La Cotte de St Brelade in Jersey during the lowest tide of the year.  After one very exciting flight in a small top-wing Cessna (less one door), she was able to use the images captured to generate a 3D model of the cave, surrounding landscape and intertidal zone.

This survey forms part of the the latest research initiative at La Cotte.  The model was created using a multi-image photogrammetric capture and processing approach, sometimes also referred to  as Structure from Motion (SfM).  Excerpts from the model are currently part of the Natural History Museum’s exhibit Britain: One Million Years of the Human Story.

TERRESTRIAL SURVEY OF THE WEST RAVINE (2014)

This year the team revisited the site and Dr Duffy concentrated her survey efforts within the west ravine of La Cotte.  The model generated from this years work can be viewed in the following video.

To have a play with the model click on this link …

Most recently, Sarah has produced a model of the landscape that can be virtually illuminated – highlighting especially the intertidal landscape.  This visualisation approach draws upon the innovations of both SfM and Reflectance Transformation Imaging (RTI)…see if you can find the path around the top of the headland.

In the future, it is hoped that this work will be combined with the surveys that Drs Martin and Richard Bates have been undertaking in the intertidal and submerged landscapes around La Cotte as well as provide a tool for monitoring the condition of the site.